Bourns, Inc. has claimed one of the most significant breakthroughs in metal oxide varistor (MOV) device design in decades. The new IsoMOV protectors, or  hybrid protection components, integrate the gas discharge tube (GDT) function directly into the MOV itself, delivering higher surge ratings in smaller packages, along with increased ruggedness. By integrating the GDT, it also solves MOV degradation issues caused by leakage currents and extends the operational life of the MOV.

The IsoMOV protectors feature lower capacitance, very low leakage, and high energy handling density. The AC voltage ratings range from 175 V to 555 V. Available in three models – IsoM3, IsoM5, and IsoM8, the nominal surge ratings are 3 kA, 5 kA, and 8 kA, respectively. The devices are available in the familiar radial disk MOV package with a smaller diameter and is slightly thicker. The operating temperature range is -40°C to 125°C.

The IsoMOV family’s extended temperature range and low leakage make it well-suited for industrial, power line communications, high-speed information and communication technology (ICT) equipment, as well as a range of harsh environment or remote applications where repairs can be both physically challenging and expensive to perform, said Bourns.

“As we see more sophisticated circuitry and reduced component sizes converging, circuit protection has to meet those trends head on, so we need to constantly design smaller and smaller devices that are not sacrificing or compromising the required protection levels that designers and, ultimately, that end users expect from circuit protection,” said Lee Bourns, marketing director for circuit protection at Bourns.

At the same time, these designs are becoming increasingly susceptible to transient damages from lightning and voltage surges and and that’s even more compounded as the individual components within the circuitry become increasingly smaller and may not be able to handle as much power or handle the transient threats as well as a larger sized device would, he said.

MOVs continue to be highly utilized for overvoltage protection and are often used together with the GDTs to extend the life of the MOVs, said Bourns. “But they don’t always meet the requirement for condensed board space and smaller footprint sizes.”

These aren’t ultra-small components like other types of circuit protection devices, which can have 0402 or 0201 or even smaller footprint sizes, he added. Traditional cylindrical GDTs measure 5 × 5 mm and 8 × 6 mm, and when combined with the MOV, they take up a significant amount of board space.

In many cases design engineers have to choose between lower performing, space-saving components or over-specified devices to meet their protection requirements. “With IsoMOV protectors, designers can now get the right level of surge protection for their application without having to make any performance, size, cost, or redesign compromises,” said Bourns.

In 2019, Bourns developed a GMOV hybrid protector technology that uses a discrete FLAT GDT plus a discrete MOV that are mechanically joined together in a single package. The new IsoMOV hybrid overvoltage protection components takes this idea to the next level by embedding the GDT directly between two MOV discs.

The flat-technology GDTs reduced the footprint size of the GDT significantly but it didn’t go far enough to solve all of the evolving circuit design requirements, said Bourns.

The company has worked on the hybrid protector technology for a couple of years. It actually grew out of a couple of company projects, including one to miniaturize GDTs, said Kelly Casey, Bourns’ engineering director for circuit protection. But the idea behind the design actually came from the company’s CEO Gordon Bourns, when they were discussing ceramic-electrode GDTs.

A key benefit of the integrated design is that it provides performance specifications usually found in larger traditional MOV devices. This enables designers to better tailor the surge protection performance to their space requirements, and allows them to upgrade their MOV overvoltage protection to include the GDT isolation without a PCB redesign.

Many designers specify MOVs rated at much higher voltages and surge currents to ensure the devices aren’t stressed to their breaking point, while others have placed GDTs in series with MOVs to eliminate leakage currents and extend the life of the MOV, said Casey.

“There are a lot of engineers that will over specify these products to make sure there’s not a failure,” said Casey. “They’ll buy a higher-voltage, higher-current-rated part than their actual application will demand.”

With the IsoMOV, designers have some choices. They can select a smaller part or stay with the same size and get a more robust design. As an example, a standard best-in-class 10-mm MOV is rated at 2,000 amps (A), compared to 3,000 A for a 10-mm IsoMOV, which is actually on par with a standard 14-mm MOV (see table below). 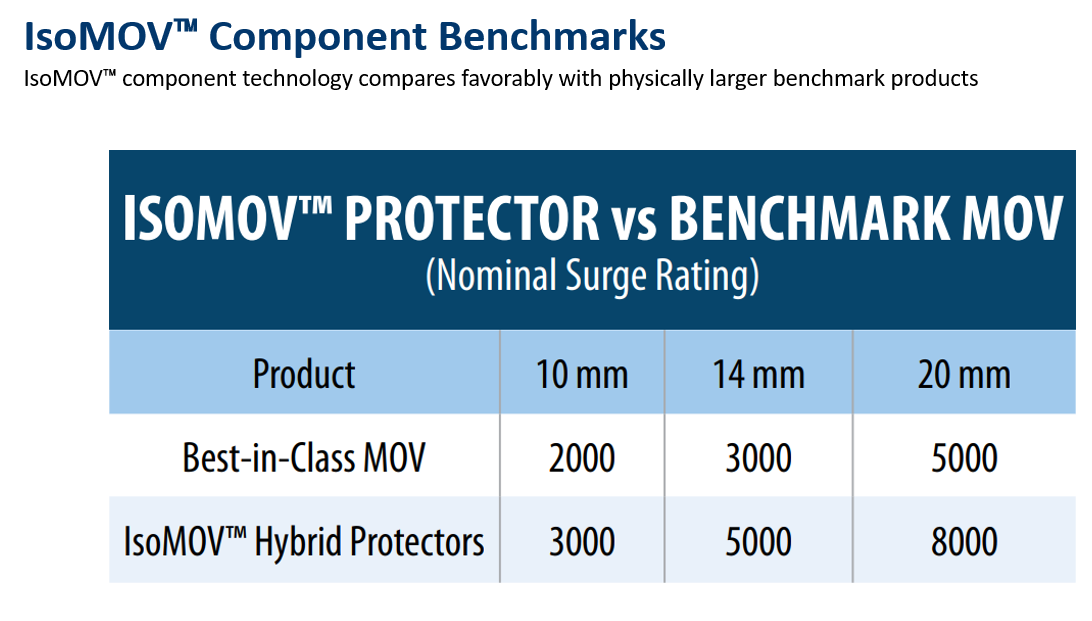 In addition, with industry-standard pin layouts, the IsoMOV protectors offer a performance and reliability upgrade to same-size standard MOVs in a pin-to-pin drop-in-replacement form factor.

By combining the GDT and MOV into a single package, the IsoMOV allows the GDT to block leakage currents through the MOV that may lead to premature failure, making the MOV inherently more robust without adding additional components into the circuit design.

There is a cavity between the two MOV disks where the GDT function is placed without creating a leakage path. The MOV disks have a concave side that creates the cavity and in the cavity is a glass material that serves several functions. These include sealing the inert gas in the GDT chamber, insulating the two MOV disks from each other, allowing the GDT to do its job, and providing a long leakage path between the GDT electrodes, which extends the life of the GDT.

In addition, the improved surge capability of the IsoMOV device is attributed to the unique EdgMOV geometry. It enhances the MOV performance by removing the main failure mode, which is a burn hole at the edge of the metallization that causes the MOV to short out. The EdgMOV geometry eliminates this failure mode by funneling the current away from the edges. It also allows for better distribution of the surge energy, which slows the aging of the MOV elements due to the surges. In addition, the better energy distribution increases surge capacity per unit area.

So how does the IsoMOV function? When the transient occurs, the IsoMOV clamps the voltage just like a traditional MOV, but because the GDT is acting as the switch the MOV does not have to tolerate that constant pressure of the voltage across it constantly, said Casey.

The GDT is the key piece to the longevity of the IsoMOV, he said. “Over its entire life the MOV is really only connected to the power line for a few seconds. The GDT has been taking that voltage the whole time except during a lightning event which only lasts for a few microseconds or milliseconds.”

“One of the issues with MOVs is they tend to get leaky over time. They don’t like high temperatures and they don’t like high humidity; all those things drive leakage currents,” Casey said. “And when the leakage currents start to increase that starts to warm the device up and as the device warms up it leaks even more, getting into a runaway condition. With the GDT in series with the MOV that is eliminated.”

However, there is a penalty to be paid when you use these devices together, which is the time to turn on the GDT, typically less than 300 nanoseconds, said Casey, and during that time there is a front-end voltage spike. He noted that the voltage spike also occurs with discrete GDT and MOV solutions, so this is nothing new to designers using GDTs and MOVs together. “In the vast majority of applications it has absolutely no impact because it’s so short in duration.”

Once the transient (or lightening surge) is over, the IsoMOV resets back to its normal standby function. “In this design, the MOV is on call but it’s not on duty. It’s waiting for the GDT to wake it up during those transients,” said Casey. 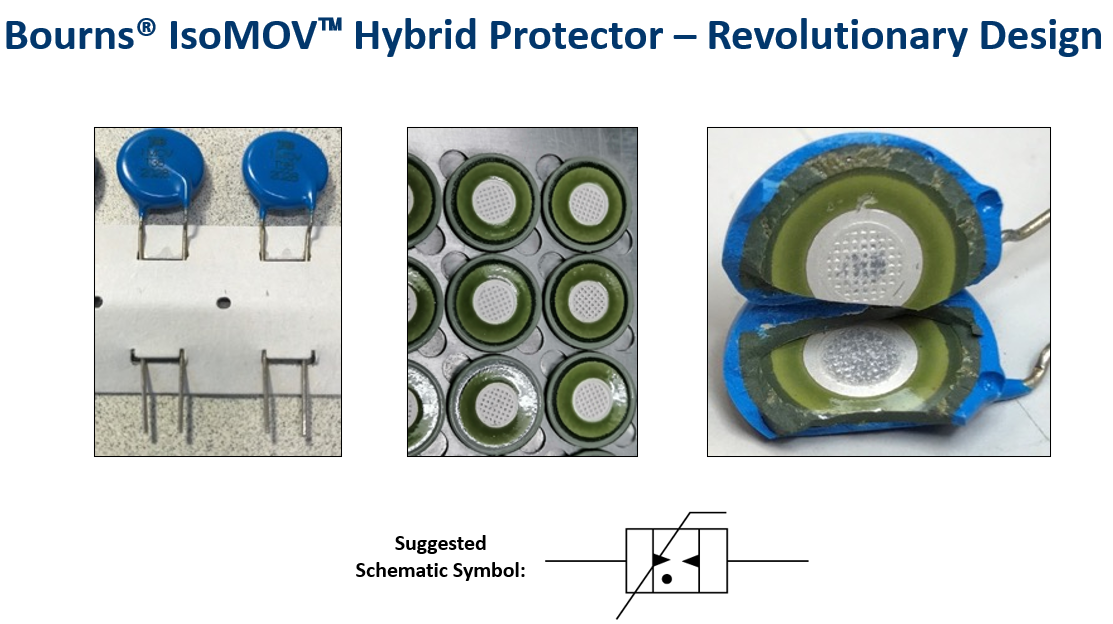 The IsoMOV protector series is UL 1449 Type 5 recognized. IEC does not currently have a standard to recognize IsoMOV, but Bourns is working with the standards body to submit changes that would recognize the hybrid technology. It likely will be included under IEC 37B, which is currently under development, said Casey.

The IsoMOV protector series is available now. Just one caveat about the part numbering. The IsoMOV part numbers are designated by the surge ratings, i.e., IsoM3-xxx (3 kA), IsoM5-xxx (5 kA), and IsoM8-xxx (8 kA), instead of based on their sizes.

“We don’t want designers to think about making a size-for-size equivalent purchase, we want them to really consider size and surge capability, which is why we numbered  them the way we did,” said Casey. Click here for the datasheet. More information about the hybrid protection devices can be found in a series of white papers.